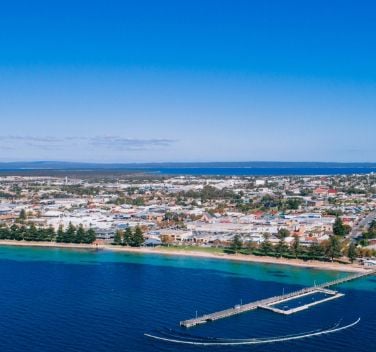 The World Transformation Movement Port Lincoln Centre was founded by Ben Moseby to do his bit to help every human on the planet learn about biologist Jeremy Griffith’s life-transforming and world-saving scientific explanation of the human condition — see HumanCondition.com.

“You can apply Jeremy Griffith’s biological explanation of the human condition to any and every situation and it explains it fully. It’s amazing and it will bring sweeping change because it’s science — it is based on understanding, not faith or dogma.” Ben Moseby

Ben Moseby is a Marine Engineer and Diesel Mechanic who was born and raised in Stirling in the Adelaide Hills. He has been living in Port Lincoln for 20 years.

Download this transcript as an A4 or US Letter PDF

I finished Year 12 [senior school] in Adelaide and went on to do a Heavy Vehicle Diesel Mechanic apprenticeship. Since then I’ve been in Port Lincoln, working on ships and boats with a Marine Engineer’s ‘ticket’ [certificate] and in a few other frontline management positions.

When I was young I was confused by people’s behaviour a lot, like most people were—why people bullied each other, war and murder, and all of that sort of stuff was pretty confusing when you’re a kid. Like most people, I blocked a lot of it out because it’s just too confusing and you don’t find any answers, so to find the understanding [of the human condition] that Jeremy has found and to read that and put that [behaviour] in perspective was a big thing for me. It explains human behaviour so well—that’s when you know there’s truth in it. Once you come across this information, you can apply it to so many…well nearly every situation and anything that you want to know about human behaviour or how the world works, and it really explains it fully; it’s amazing. And once we’ve reconciled the human condition in ourselves, we can reconnect our real selves with the world and everything in it.

I want to open a WTM Centre in South Australia to be a point of contact for anyone that might be interested in this information, because it really is the only thing that’s going to change the situation we’re in, and hopefully make it a more painless upbringing for the next generation.

On a personal level, it’s given me an understanding of human behaviour and why people behave like they behave, which is a huge relief, because a lot of questions you’ve had with yourself, of why people behave the way they do, are unanswered and so you just leave them, so having that ‘grey area’ filled brings contentment; contentment around knowing why people behave like that and knowing that it’s not something that can’t be changed, whereas prior to coming across this information I thought that some people maybe were just born evil or bad, or obviously had an upbringing where there was no chance for them. But when you read this information and it explains why people do behave like that, because of what they went through [growing up under the duress of the human condition], and their way of coping with it [their ‘upset’ state], it gives you a lot of hope that people can be changed and that change is what will make all the difference, individual change for everyone.

Once I understood it was a psychological problem that people suffer from, well psychological issues can be fixed with understanding, whereas a genetic problem is inherent and it’s programmed in and there’s no changing it, so that’s where this is different. [See Video/​Freedom Essay 2: Debunking the ‘savage instincts’ excuse for human behaviour, on the human condition not being an immutable genetic condition.] It makes possible a personal change in people individually and so it will be a sweeping change, because it’s not going to be forced on people—because it’s an understanding, it’s not dogma; it’s not faith-based. It’s a personal understanding which means you’ve got to personally take the information in to understand it. So it’s not like religion where people have to get together and sit in one church and listen to someone preaching it [a way of life], which is obviously faith and dogma, it’s more of a personal understanding that most people can relate to, and so it will be a change where people who want to make it will not have that change forced on them because it sounds great, but because it’s something that people will personally want to do for themselves.

It’s just such a huge amount of information to take in that’s so foreign from what you normally believe, that you’re sort of wandering around in it all, asking yourself ‘How does this all fit together and where do I start with it all?’, but once you get a first glimpse of it it’s amazing—it changes how you think.

One of the things that was really interesting with this information is how long and how many different thinkers, like religious people like Moses and thinkers like Plato, have been aware of this problem and have been trying to unravel the whole thing. It’s a constant that there has always been someone through history that’s been trying to work on this subject and hasn’t had all the pieces [of the puzzle]. It’s been understood by so many people for so long that there’s the ‘instinct versus intellect’ problem that led to our behaviour but until you stand back I wouldn’t have picked that out. I always thought that there was some truth in religion, but I didn’t believe in all of the other stuff that went with it, like the way the church carried on and were pretty much hypocrites in the way they, and the proverbs, are saying how to treat people [properly] but then behind the scenes they’re doing the complete opposite. That really put me off religion, because I had a fair bit of it pushed on me in school, so I knew there was some truth behind it but I didn’t get that whole ‘gig’ that they were selling, so it’s really interesting to read Jeremy’s interpretation of what a lot of those Biblical stories mean, and know that there is some truth in them but that they [religions] couldn’t see how the whole picture works. Obviously thanks to science, with its understanding of genes and nerves, it’s been worked out and it’s been seen from a truer [more factual] perspective I suppose than they [religions] could see it from.

The Adam Stork story is so simple; everyone understands how animals are genetically driven, and obviously with Darwin’s theory of adaptation, that [traits are] genetically passed down and the ones that didn’t have a genetic [advantage] died because they weren’t genetically orientated in a certain way. The analogy of putting a conscious mind in an animal [and seeing] how that battle would break out is such a simple analogy but it’s there to see the truth of it really—how it would affect a stork, and the confusion that would create with whatever species got the human condition that we’ve had; the confusion that we’ve had from having a conscious mind and an instinctive mind doing battle. So once we’ve reconciled the human condition in ourselves, we can reconnect our real selves with the world and everything in it.

THE ‘INSTINCT VS INTELLECT’ IS THE OBVIOUS AND REAL EXPLANATION OF OUR HUMAN CONDITION, AS ALL THE GREAT THINKERS THROUGHOUT HISTORY EVIDENCE

Watch how the ‘instinct vs intellect’ is the obvious and real explanation of our human condition, as thinkers throughout history evidence, but it required Jeremy Griffith’s ability to explain WHY this conflict occurred.

MUST, MUST WATCH: Craig Conway, the acclaimed British actor, writer, producer and broadcaster — and the founder of WTM North East England Centre — has brought all his skills to bear to produce the ideal introduction to Jeremy Griffith’s explanation of the human condition in this absolutely astonishing, world-changing and world-saving interview with Jeremy. It’s called ‘THE’ Interview because in it Jeremy gives such a concise and accessible summary of his world-saving explanation of the human condition that it’s nothing less than the most important interview of all time!

“The sequence of discussion in FREEDOM is so logical and sensible, providing the necessary breakthrough in the critical issue of needing to understand ourselves.”

“What this book effectively does is take humanity from a state of bewilderment about the nature of human existence to a state of profound understanding of our lives. It is a case of having got all the truth up in one go! Truly, this is the book that saves the world!”

“I don’t care what question you have, this book will answer it.”

Once we’ve reconciled the human condition in ourselves, we can reconnect our real selves with the world and everything in it.

Alongside the original WTM Centre in Sydney, Australia, World Transformation Movement Centres are being established around the world to help bring to everyone the now desperately needed all-relieving and all-explaining biological understanding of the underlying issue in all of human life of our troubled human condition.

Visit the WTM’s Transformation page to learn more about the formation of these Centres. You can access the following examples of WTM Centre websites by clicking on their images below.

Subscribe to our YouTube channel and receive two or more videos each week. These videos will include enthralling, bite-sized samples of the explanation of the human condition, and also descriptions and examples of the transformation that is now possible for all our lives.